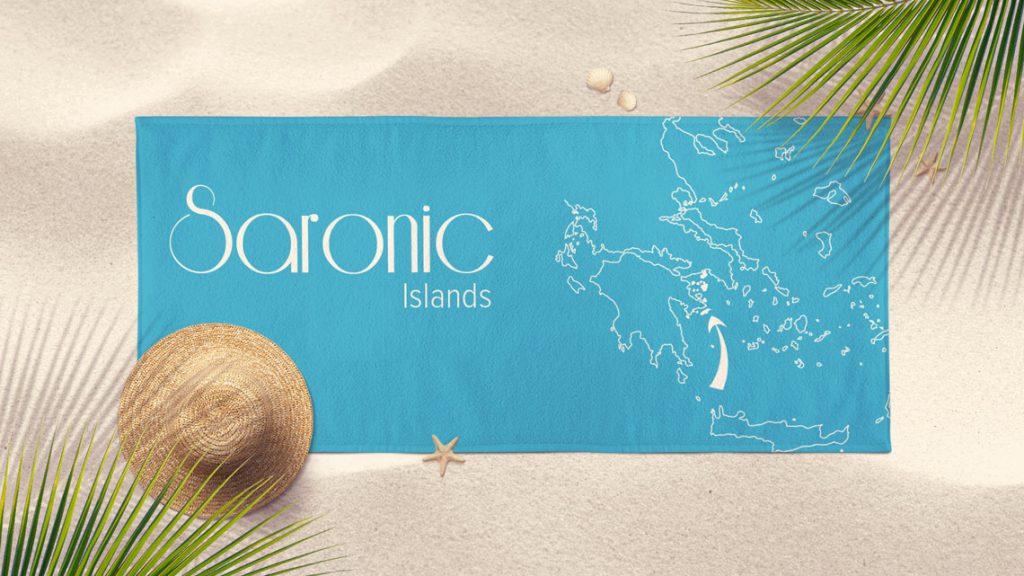 Aegina , Salamis , Poros , Spetses , Hydra small mythical nymphs in the Deep blue waters of the Saronic and Argolic Gulf.
When one travels around Cape Sounion , one sees between the high towering columns the Temple of Poseidon and there outline: Salamis where one can still thinks to hear the noise of the oars of the victorious Greek triremes in 480 BC. from the naval battle of Salamis where the Persian fleet has been destroyed. Aegina , in the middle of the Saronic Gulf with its famous temple of Aphhaia and the deep green coloured pistachio groves, a little further then Poros, a stone’s throw from the Peloponnese, where the scent of flowering lemon trees wafts across the strait from Galata. A bit further lies the rock of Hydra, on which there are impressive Captain houses, which were built with great craftsmanship of local artisans .

The nautical tradition is here still alive. At the entrance of the Gulf of Argos lies Spetses, the smallest island in this group is almost in close proximity to the Argolis peninsula and is another center Aristocratic island culture .
Because of its proximity to the capital, the islands of the Saronic Gulf where between 1950 and 1960 a popular destination during the summer months. They were the first who built a tourist infrastructure, but not with the sacrifice of the environment , because only small hotels where build that where harmoniously blended into the environment. The Saronic islands have a rich mythological history .
It is believed that these were inhabited since the prehistoric times . Throughout its history, they were tied to the nautical tradition . A first prospered in trade and seafaring began during the 6 Cent. BC. However, their importance declined when Athens supremacy took over during the 5 Cent. BC. They took part in the Persian Wars.

The Straits of Salamis became the scene of the most important naval battle between Persians and Greeks (480 BC). The islands were members of the Athenian confederacy, later they came under Macedonian and Roman domination .
During the Byzantine Empire, and later the Venetians, they were exposed to constant pirate raids. Subsequently they were conquered by the Ottomans. During the Liberation War, particular the participation of the ships from Spetses and Hydra was decisive. In 1828 Aegina was temporary capital of the newly established Greek state .

END_OF_DOCUMENT_TOKEN_TO_BE_REPLACED

Our guide provides you with useful informations about Salamis.

END_OF_DOCUMENT_TOKEN_TO_BE_REPLACED

Our guide provides you with useful informations about Poros.

END_OF_DOCUMENT_TOKEN_TO_BE_REPLACED

Our guide provides you with useful informations about Aegina.

END_OF_DOCUMENT_TOKEN_TO_BE_REPLACED

Get to know Hydra with our Guide.