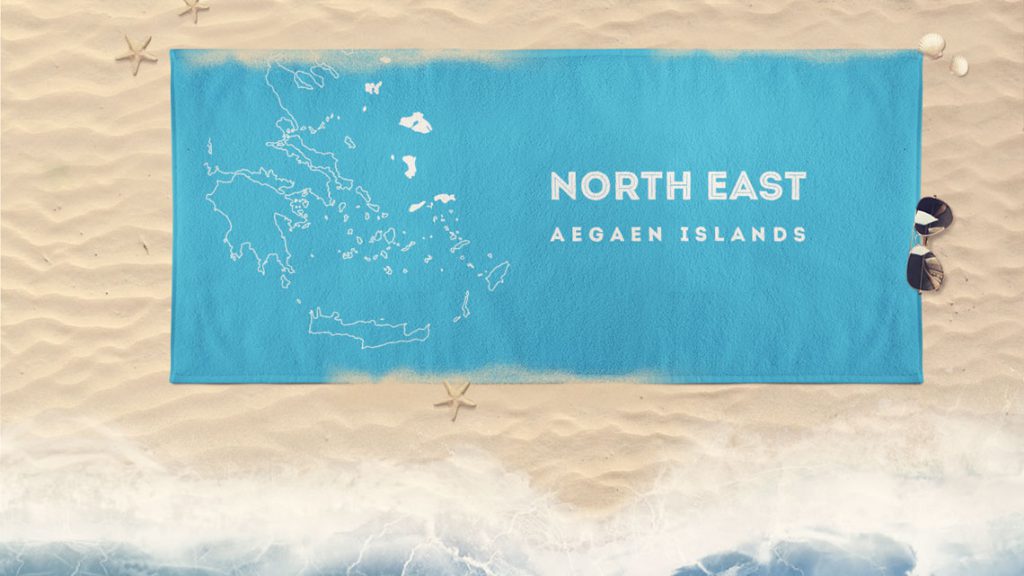 The north and eastern Aegean islands, with its rich past and promising future, are on the fringe of the Greek area, close to the Turkish coast. They are characterised by a rich vegetation, for example, Abundant water, fertile soil, mild climate and a beautiful landscape. Poetry, music and philosophy, they all have their significant representatives: Sappho, Alkaios, Terpander, Arion, Pythagoras, Pittacus, Theophrastus, Aristrachos. In more recent times, Theophilos , Myrivilis , Panselinos. The most famous of all these sons of the islands is Homer, of whom it is that he was born on Chios.

Deep green valleys, rich olive woods and vineyards, of those slopes go up to steep ravine , beautiful creeks, beaches in the golden sunlight and welcoming bays, all this is provided by the islands. Immersed in the glorious landscape, the villages, often with Ornate Painted facades surrounded by plantations with mastic trees, castles, Byzantine churches, ancient temples, foundations by Byzantine emperors, rare, beautiful mosaics, as in the Nea Moni Monastery. The islands were inhabited since the ancient times by Ionians and were in Archaic period of great economic and cultural importance.

At that time Important artists and politicians were born here. During the Persian Wars , the islands were conquered by the Persians and after the end of the war again independent (479 BC.). They were then members of the Delian League , attempted to leave it , but were stopped under the use of force by the Athenians. They banished out the leader. During the Peloponnesian War (431 – 404 BC) the islands allied temporarily with the Athenians and temporarily with the Lacedaemonians. They were conquered by the Macedonians, then by the Egyptian Ptolemärn and finally by the Romans.

During the Byzantine Empire, the islands were places of exile, they were then subjected to constant Pirate raids. After the conquest of Byzantium by the Francs (1204) the islands were first held by the Frankish ruler in Constantinople, later they were Feudal of Venetian and Genoese families. Back then, the commerce and shipping took a considerable upswing. After the Ottomans had conquered Constantinople, they also conquered, one after another, of the East and North Aegean islands. Thereafter, and until the time of its liberation in 1912 , these islands where exposed by the mercy of there occupiers. At the liberation wars they actively participated with their ships.